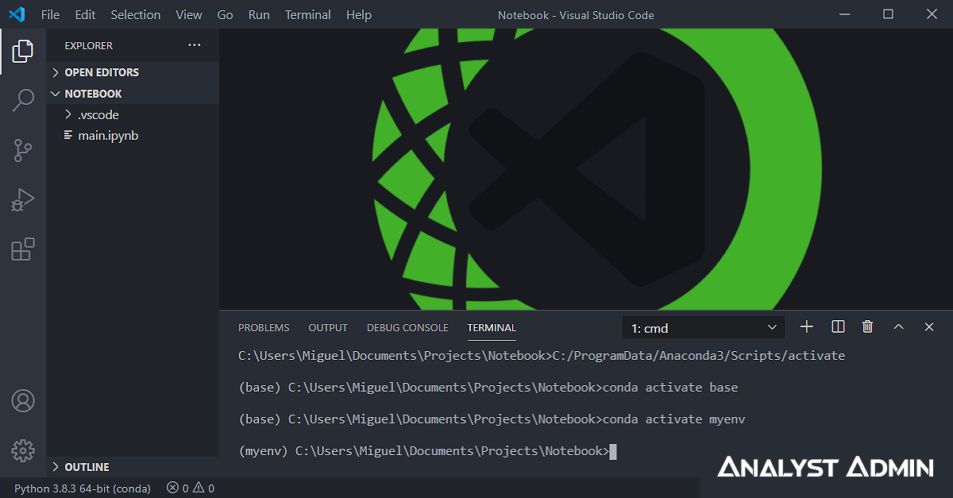 If you’ve been following the evolution of iPython, Jupyter Notebook, and JupyterLab, then you know the features are only getting better and better with each evolution. However, the core features of the Jupyter family of products are focused on data-science-centric tasks. These tools are perfect if you’re only working on data science projects, but what happens when you need to integrate with a backend and a frontend all within the same project? You basically end up with a not so easy QA and deployment workflow. Setting up Anaconda on Visual Studio Code (VS Code) opens up the option for advanced integrations and workflows that accept multiple frameworks, far more programming languages, continuous development, and continuous integration pipelines.

Head over to Anaconda and download the installer that corresponds to your operating system. I recommend installing the latest Python version unless you have a compelling reason to use an older one. For example, if you’re building a solution for a client with an older version of Python and you need to match their version then this would be a valid reason to choose an older Python version.

For detailed step-by-step instructions, I defer to the Official Anaconda Documentation.

Start by creating a new folder for your project. For example Documents/Notebooks. Then open Visual Studio Code and select Start > Open Folder…

Go into the folder that you created and click “Select Folder”. Visual Studio Code will load your folder.

A Python Interpreter reads your script and translates them into Python byte code. You may have multiple Python interpreters if you’ve installed the vanilla Python from the official Python website and if you just installed Anaconda. Also, if you’re on macOS Catalina for example, your OS already has Python 2.7.16 installed as shown below:

Back to Visual Studio Code, select Python 3.7.6 64-bit (‘base’:conda). Your version may be different if you downloaded a different version of Anaconda.

Go through the process of creating the enviroment then enter the following command to activate the new environment:

Now the path on your terminal should change to something like:

We’re done with the setup, and we can try creating a notebook. Go back to the Explorer (Ctrl+Shift+E), create a new file by clicking on the New File Icon, then enter main.ipynb and hit Enter.

A new notebook should open up on the side:

When the new file opens up it might take a few seconds, but it will eventually look somewhat like a Jupyter Notebook.

Then enter Shift+Enter to run the cell.

The notebook will print the test statement.

We’re just about done. If you want to do a more thorough test then you can type something like:

From here on out you can create more notebooks or write custom packages to use throughout your project. To install new packages install them with the conda install command in the Visual Studio Code terminal and the virtual environment will take care of the rest.

How To Set Up Charles Proxy on macOS