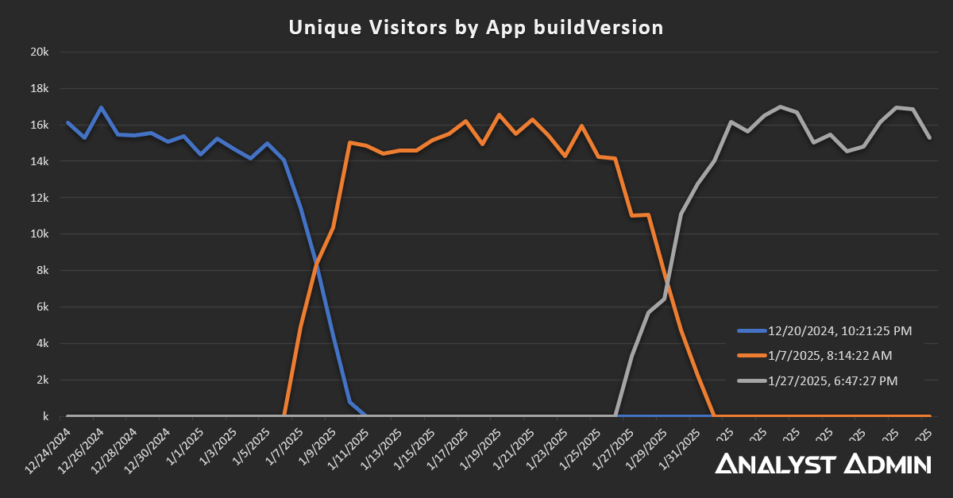 Analysts and administrators of Google Analytics and Adobe Analytics need to analyze product features that are introduced with dev releases. New product features or product enhancement are tied to dev releases, which means that due to caching, or long app visits, a visitor may take days to pull in the latest app version – knowing which version of an app is served to visitors is critical for accurate reporting and analysis.

The goal of this post will be to create a React app version that is captured by Google Analytics or Adobe Analytics.

The example above shows a simple date-time buildVersion. However, you can also set buildVersion to a more traditional “v1.2.6” format using the same method that is described in this post.

For reporting and analysis, a date-time format is generally easier to understand than a traditional version format. Furthermore, Analyst Admin recommends an auto-setting buildVersion that is updated every time the app is built, which means Google Analytics and Adobe Analytics always know which exact app version generated the data for a visit.

Analyst Admin will walk you through all the pieces of the set up.

In order to create a usable and auto-updating app buildVersion variable, we need to create it either at build time (npm run build) or during deployment (Jenkins or similar CI/CD pipeline). The easiest approach is at build time since the app developer has full control of the process while other methods may involve other teams (DevOps or IT) in addition to the app developer.

Create a file to host buildVersion

In src/, create a new file called buildVersion.json. Leave the file blank, save, and close.

In the project root directory, create a new file called generate-buildVersion.js and paste in the following code:

The script above will create an object with a property buildVersion, which is then set to the current date-time. Finally, we use the fs.writeFile method to write the object to the src/buildVersion.json file.

The last piece here is to call the generate-buildVersion.js script at build time. To do so, modify your package.json script.build property.

Now your app will write buildVersion to buildVersion.json every time you call npm run build. The order of the commands is important since it runs left-to-right, first executing node generate-buildVersion.js, then calling react-scripts build.

Now that you have buildVersion.json being written with a buildVersion variable, we just need to import that into our app.

Then we can load that into the data layer.

Each tag manager has a unique way to set up a new variable and map it to a tag.

Save and close, then go to your Google Analytics tag

Edit Tag > More Settings > Custom Dimensions. Set the index depending on the custom dimension availability for your property.

Save, then go to Rules > Find your Adobe Analytics Tag > Actions > Adobe Analytics – Set Variables > Select an available eVar, then set to %dataLayer.buildVersion%. For example:

Keep changes, then save tag.

Once you have the buildVersion variable created, fed into the data layer, and picked up by the tag manager, the next step is to make sure that your analytics tool is expecting it and processing it into the right report.

Go to the Admin > Property Settings > Custom Definitions > Custom Dimensions page for the property that you are working with. Add a new custom dimension.

Click Create to save your new dimension. Note your assigned index – you’ll need to make sure the index here matches the one set up in Google Tag Manager tag settings.

Once data starts getting collected for the Build Version Custom Dimension, you can view the data by creating a custom report under Google Analytics > Customization > Custom Reports. The new custom dimension can also be accessed via normal reports under the Secondary Dimension dropdown.

In Adobe Analytics, go to Admin > Report Suites. Select the report suite that will ingest the buildVersion variable.
Then go to Edit Settings > Conversion > Conversion Variables, and add a new eVar.

Save changes. Note the eVar number in Adobe Analytics and make sure that the tag manager is mapping buildVersion to the correct eVar.

Once data for the new eVar starts getting collected, it can be accessed via the Build Version dimension in Analysis Workspace.